The Rest of The Fannie Kerns Story 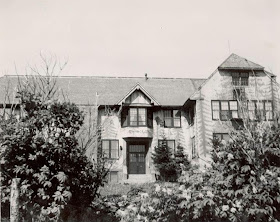 The Fourth of July is over, as is the anniversary of Alaska’s flag-raising at the Jesse Lee Home on July 9, 1927, and the dedication of the Emblem Club memorial for Benny Benson at the Seward Lagoon. Iron Mountain by Forest Acres was renamed Benny Benson Mountain by the Seward City Council in the 190s when Council man Bernie Hulm made the motion and it passed the commission in Juneau approved it.

With all the hoopla about the flag over with, I honestly believe is it high time to finish the rest of the story about the neat lady who actually sewed up the flag using materials from her sewing at Jesse Lee Home. She worked at the home and sewed for the children who lived there She mended torn sheets, patched pants, made clothing of all descriptions. She was a very crafty-type lady and made things out of scraps of material and buttons, some lace or bias tape. She made cute things out of nothing of value. This lady was Frances (Fannie) Kibsgaard Kerns.

Fannie has repeated this story to my mother and me about sewing up the flag after seeing Benny’s crayon drawing at Jesse Lee. I think it’s time to tell who took the time to actually sew the flag and never got a word of thanks from Alaska’s citizens. Her name should be included in the book, “The Story of Alaska’s Flag,” recently published, but it wasn’t in there.

Fannie had two sons – Raymond and Billy Kibsgaard, raised in Seward. The tidal wave and earthquake of 1964 washing their home across the bay. Their home was located on the corner where Bayview Apartments on Third Avenue have their parking lot now. The little home road the waves and they lost everything except the Holy Bible, which rode safe and sound on the floor. Fannie and Raymond then moved to a little house near Western Auto. Th house is now torn down.

Benny Benson, Raymond and Fannie have passed on now but her words are fresh in my mind She loved to sew and made many lovely things she gave away to friends and at times she’d get a generous gift of money fore her work.

Let’s not forget this awesome lady. Its’ a beautiful flag and long may it wave.

Thank you all so much for thinking of me while I was in the hospital in Anchorage for cataract surgery.

Your visits, letters, cards and flowers meant a great deal to me. It’s nice to know I have so many good friends.

I am doing just fine now, though still under a doctor’s treatment.

It is great to be home and feeling fine.

In 1928 the Jesse Lee Home was moved to Seward from Unalaska-building, personnel and children.

Among those children was a young boy who became well known as the designer of the Alaska Flag. Many stories have been published about Benny Benson. Other cities have claimed him. But one of the lesser known orphans, but dear to Seward, was Benny’s classmate Frances Kern.

Born of native Alaskan and Hawaiian stock, result of the whalers and Capt. Cook’s ventures, Fanny has been a true representative of Alaska and Seward. She has been concerned about projects to raise money to help other unfortunate children. She has worked for these projects for many years.

Frances Kern stopped in the LOG Offices to remind us that Mrs. Swetman was a charter member of the Seward Post No. 5, American Legion and was a past president of the Auxiliary. “She also helped us to rebuild after the fire and earthquake”, said Frances.

(Ed. Note—As we commented in the issue last week, man of the causes that Mrs. Swetman supported were unknown to the community at large. We are sure there are many organizations and projects she has supported that most of us will never know about.)

Frances Kerns, better known to her many friends as Fanny, was once a student at Jesse Lee Home. She was asked to do the Jesse Lee square on the Seward historical quilt being done for Bicentennial. Though not many people know it, Fanny was at Jesse Lee Home when Bennie Benson designed the Alaska Flag, and Fanny herself created a design that received sixth place in the statewide contest sponsored by the American Legion which resulted in the official Alaska Flag.

Fanny Kerns has returned from a trip to Seattle. While outside she visited with son Bill and family-Bill wishes everyone in the old home town well and says Hi. Fanny also visited with George and Paul Wolcoff and their families. Paul & Rosie took her to see Mary Hughes who especially want s to be remembered to her oldtime Seward friends. Fanny also visited with former Sewardite Ann Kitchman in Tacoman. Good to have you back Fanny!

Fannie Kearns has gone to Seattle for treatment.
at 4:48 PM
Share